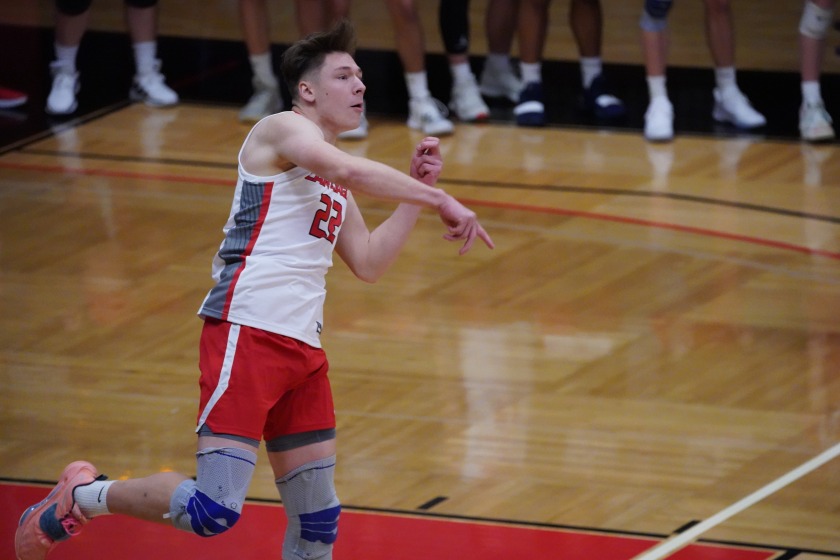 The FrogJump Team of the Week is our weekly honor roll, recognizing some of the top performances at each of the seven positions from the last week. Honorees are nominated by their SID/Coaches and selected by a committee of FrogJump staff.

Liam was unstoppable in the Pride’s match versus the NYU Violets last week. Throughout the five-set affair York proved to be the go-to option, showing off his insane vertical and blasting BIC’s left and right. He ended the match with 29 kills (5.8 kills/set) on a .451 hitting percentage.

The energetic Middle Blocker from Fontbonne was near unstoppable in action last week. Woolsey helped the Griffins to a 2-0 start with sweeps over St. Norbert and Wisconsin Lutheran. He finished the week with 17 kills (3.4 kills/set) on a .696 hitting percentage and 4 blocks through 6 sets of play.

The new Middle at Carthage is making a name for himself early this season. In the Firebirds 5-set loss to Dominican, Markes ended the match with 16 kills (3.2 kills/set) on a .571 hitting percentage with 3 blocks. He would follow this up with an eyebrow raising performance against North Park the following day, where he had 17 kills (5.7 kills/set), hitting .682 % with another 4 blocks in the sweep. Simply put, wow.

The Hammer is here. A Pepperjack breakout pick, Gulick was dominant in the Brewers decisive victories over SUNY Potsdam and the Arcadia Knights. Through both matches, Gulick finished with 25 kills (4.17 kills/set), a .587 hitting percentage, three total blocks, and one ridiculous highlight (check our Instagram).

Nealon was key in NCC’s undefeated week, with victories over Concordia-Chicago and #5 Benedictine. The dynamic setter dished 36 assists against CUC, helping the team finish with a .425 hitting percentage. He followed this up with 41 assists and 8 digs versus #5 Benedictine, facilitating an offense which ended the match hitting .400.

Liberos don’t get much better than David Cerqua, and last week showed why. Cerqua had 13 digs and 3 assists in the Cardinals 5-set loss to #15 Juniata. He followed this up with 17 digs and 4 assists in their 3-1 win over PSU-Behrend. He finished the week with 30 digs, averaging an insane 3.3 digs/set. I can only say this so many times, don’t hit to David Cerqua.