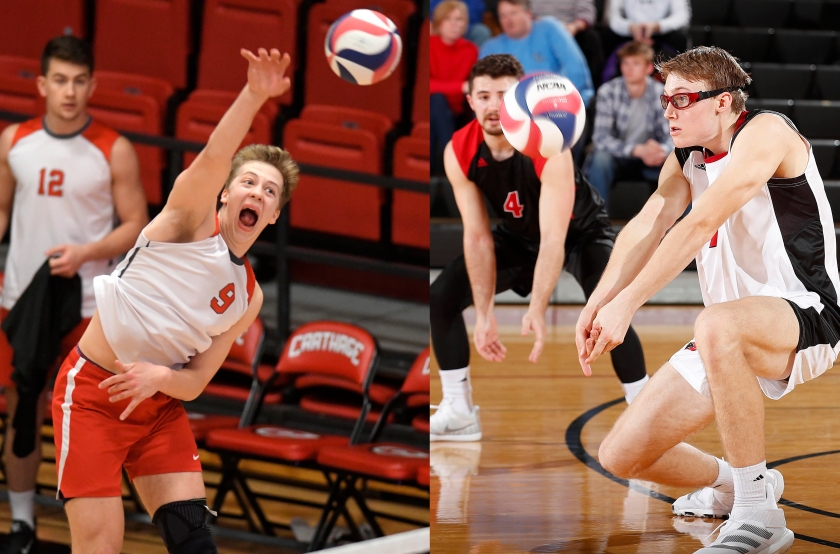 February 25, 2021 Ramius CCIW Comments Off on Best of the Midwest: #7 Carthage vs #11 North Central College

I came into this season with a general rule: try not to do write ups for individual matches. This was for a variety of reasons, most of which are for my own general well-being. I’m a huge volleyball nerd with ADHD and could easily go down a hyper-focused rabbit hole writing countless pages on every match played every night… or I could start a paragraph of a cool piece to only not finish it for days at a time (it’s a roller coaster). I also have a full-time job which requires me to work odd hours and some modicum of sleep. Jokes aside, there are so many quality teams and so many quality programs in Divisions III, I simply wouldn’t due justice to all of them.

However, I’m weak to my own vices. Many FrogJump fans know I’ve had the Carthage vs North Central College (NCC) circled on my schedule as a match to watch since I saw North Central take down Aurora and MSOE at the beginning of February. The NCC squad is young (mostly sophmores), but to me they had all the looks of a program on the cusp of turning the corner from bubble team to national recognition.

Carthage has been a recognized program throughout D3 history. They’ve competed at a national level for a long time and historically were one of the great powers of the division; Carthage representing the Midwest, Springfield and Juniata the East Coast, and Santa Cruz the West Coast. There’s a lot of D3 history in the program, but there’s always been a narrative of it being undeserved due to their NCAA tournament troubles (especially from the East Coast). I’m here to tell you that regardless of what narratives you choose to believe, Carthage is very strong. They are rightly considered a top 10 team in the coaches poll currently, and I believe they might be in the same category as Springfield and New Paltz (I guarantee most of the people who disagree with this assessment have not actually seen a Carthage match this year, and to them I say your loss, the team is fun to watch).

I’ve watched every match NCC and Carthage have played this year, and knew coming into the game this was going to be a precursor to what we will see in the CCIW Championship. I was expecting fireworks, I was expecting a fight… what I got was a war; and I enjoyed every minute of it. These teams went after each other (check out some highlights on the FrogJump instagram).

Set 1 was very clearly NCC’s strongest set of the night (more on that later), and they came out fearless. They didn’t play like they cared who Carthage was, they played like a young squad starting to understand their own power as the set unfolded. They challenge the Carthage block, ripped balls from the service line, and hyped their team when the momentum rolled. They punched Carthage in the face early and often, and forced the first time-out at 12-8. They were largely in control up until the final stages of the set when Carthage was able to pull away after a few solid plays by Bulthuis and Slivinski. Carthage won the set within the last five points played, taking it 25-23.

Everyone interprets things differently, and obviously my interpretation of this match isn’t going to be the same as others. But after set 1 Carthage looked as if they had something to prove. They had just dug deep to come back and win over an opponent who finally played them on a level they haven’t yet experienced all season.

This was a matchup between nationally ranked teams, and NCC showed they could hang with Carthage in the opening stanza, and it was Carthage’s turn to respond. Set two was them in all phases from the opening serves. They asserted dominance early, and in all regards definitely rattled NCC off their game from set 1. In a match like this where two teams are going to slug it out, getting rattled early is terrible, especially against a more experienced program like Carthage who is not going to give you easy points with a large lead.

When teams are throwing bombs s at you from the service line, cranking balls from every spot on the court, playing physical/powerful volleyball… the game becomes incredibly mental. Who’s going to break first, who can’t take the hit anymore. Which side can’t throw anymore weight behind a serve or swing. This was what this match was evolving into during the first set. Carthage capitalized on this early in set 2.

Momentum was clearly against NCC. In these situations when your down 5 points, off your game, just trying to side out… your looking for a play/player to just reset your team. You need something to get the squad back on track, reminding them of the game they can play. That happened at 22-18. When All-American Jared Moser got a ball and put it through a double block to the floor.

It may not have won the set, but the sequence stopped the bleeding. These aren’t moments which get spoken of in camps, your not going to see presentations at clinics about them, but they are so crucial when it comes to actually playing the game at a high level. This play reset the team (at least from my vantage point), and while it didn’t win the match it did set up NCC going forward.

Set 3 NCC started out the way they did in Set 1, in control. They punched early, grabbed a quick 2 point advantage, and it became a side-out game. The first 15 points of this set were literally just side-out points with NCC advantaged; each team running their offense and playing hard. It was 16-16, approaching gut-check time. I had a general sense that whoever won this point was going to win the game, just based off the flow the match..

What I didn’t expect was the rally that ensued on this crucial juncture, which hyped the point even more. It was an ugly rally as opposed to the plays that had happened prior, one of those points where each side is scrambling and everyone’s just fighting to keep the ball in the air. Each side was able to better the ball once, and Carthage was able to take a 17-16 lead. It was all Carthage from here, as powerful volleyball tends to landslide when a crucial moment goes your way. They would win 25-17; after losing the majority of the set up to 16-16.

A lot of people would look at the final set score and judge NCC for not being able to keep it closer. I think that’s beyond misguided, for a variety of reasons. Primarily, these teams were playing “powerful volleyball”. To play like that takes a tremendous amount of physical strength and endurance, combined with the already high mental toll which is intrinsic to our sport. North Central is a young, powerful squad just figuring out the true extents of their talent, and they went up against a team who knows was able to keep their high level of play consistent through the entire match.

North Central had several moments where they could have taken control of the game in Set 1 and Set 3, and Carthage was mentally strong enough not to let the game slip away from them. A year from now with more matches under their belt, this North Central squad won’t be making those mistakes (I won’t list what they were, if you’re curious go watch the match it’s on-demand still). I know they won’t because young players have to make those errors in real-time in order to realize how golden of an opportunity they are when they come around again.

I commend both programs on the match, I’ve seen the large majority of the D3 games played so far this year and have to say this was by far the best one so far. Carthage continues to impress me in terms of their play, and I only wish we could have a more conventional regular season to see what they might do against Dominican and some of the East Coast teams. North Central, the future is bright for you guys, learn from this defeat, and as my old coach Radu would say, “Believe in your power”.